First of all, I would like to thank many of my fans for their encouraging words, texts, and emails regarding my reserve nomination for the Olympic games. The decision was heartbreaking. It has been so nice to hear how many people are supportive and don’t understand how Fibonacci and I could be left off the team.It has been this support that has made every day easier for me and has helped me regain a fighting spirit and move on.

Many fans noticed and commented on how well Fibonacci jumped all year and asked how he would have faired in Noelle Floyd.com’s analysis of clear rounds Olympic-nominated horses jumped this season. In case you haven’t seen it, make sure to have a look: www.noellefloyd.com/clear-rounds-rio-show-jumping/. The results are quite interesting.

This year Nacho competed in seventeen 1.60 rounds and kept a clean sheet on remarkable twelve occasions! That means he cleared 71% of all CSI5* courses without a fault, putting him among the top horses in Noelle's ranking.

Nacho started this year at the World Cup Qualifier at Deeridge Farm in Wellington, jumping double clear and finishing second in the World Cup class. You can watch his jump-off on Youtube: https://www.youtube.com/watch?v=Pop6x4AgEcw

Nacho continued the season at WEF in Wellington, where he jumped double clear and finished 3rd in a $500,000 5* GP.

Then Nacho went to the 5* LGCT event in Madrid, where he jumped flawlessly throughout all three rounds of the Grand Prix. All three rounds can be viewed on the GCT website: https://www.globalchampionstour.com/events/2016/madrid/results/1517/class-12-madrid-2016-csi5-160-mIn/

In Aachen, Nacho helped the German team win the prestigious Nations Cup for the first time since 2008, wowing the crowds with two amazing clear rounds: https://www.youtube.com/watch?v=YKKYq3NpNzE. The first round of the ROLEX Grand Prix, which proved to be the most difficult course of the season with no clear round, Nacho had one unlucky fence down and was just above the time allowed. However he returned with a great clear in the second round to finish 10th.

Looking back it's been a fabulous season. I am so lucky and grateful to have such a wonderful horse and team supporting me. Thank you all! 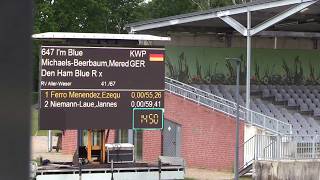